With the backing of tech giants like Google and O'Reilly, plus major national foundations, the nonprofit Code for America is working with individual cities to develop software to improve public services, sponsoring fellowships to support developers working in the public realm, and advocating for governments to share their data more openly and in a way that supports third-party application development. 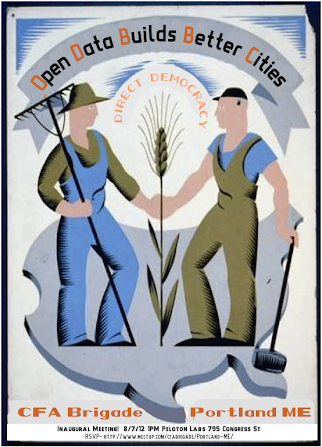 The organization is also encouraging the establishment of local "brigades" who can work on local issues and spread the open-government gospel. Yesterday, at the Peloton Labs coworking space in the West End, a small group of programmers and enthusiasts (including your editor) got together to establish a "Code for Portland" brigade.

Early ideas include liberating local transit data so that developers can build more useful mobile phone apps, developing mobile technologies that could increase utilization and efficiency in the city's cab fleet, liberating regional electricity production data to encourage people and businesses to use more wind power, and gathering data from the city's sewer system to encourage people to conserve water when the city's aging sewers are near or over their capacity.

For the time being, the group is still small, and still looking for a low-effort, high-impact project that's feasible.